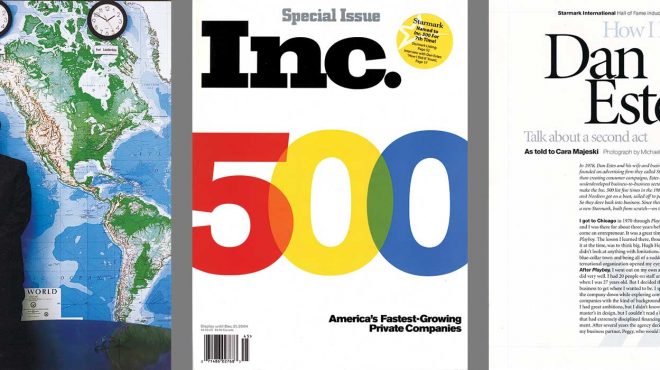 Starmark International, a Fort Lauderdale-based full service marketing communications agency, has been named for the seventh time to the Inc. 500, ranking of the fastest-growing private companies in the country – only the third company to ever achieve this special Hall of Fame honor. Starmark ranks #109 on the 2004 Inc. 500 (#7 overall in growth in the Advertising & Marketing category), with a five-year revenue growth of 1,340%, and an increase of 268% since it returned to the list last year, while the advertising industry has only been flirting with a turnaround. Now in it’s 26th year, a new, reborn Starmark returned to the list in 2003 after a 16-year absence.

Starmark’s growth continues to outpace the industry, which is beginning to show a few sparks of recovery after a multiyear lull. According to statistics published in March 2004 by TNS Media Intelligence/CMR, total U.S. advertising spending rose 6.1% to $128 billion in 2003, while the industry saw a modest 2.4% growth in 2002.

The firm’s achievement is highlighted by a “How I Did It” Hall of Fame interview in the Inc. 500 2004 Special Edition with Starmark CEO Dan Estes. The article cites Starmark’s success in the 1980s in developing the business-to-business sector, which attracted a corporate suitor and allowed Estes and his wife and partner, Peggy Nordeen, “to retire young.” They “got on a boat and sailed off to paradise – and couldn’t stand [retirement].” Six-plus years ago, they “dove back into the business,” garnering two more places on the Inc. 500 “notable” list. Estes recounts how he went from a small Midwest blue-collar town to Chicago as a Playboy magazine art director to finally realize his entrepreneurial compass.

Estes says there have been changes in the business between 1978, when he started the first Starmark in Chicago, and 1998, with its rebirth in Fort Lauderdale – technology. Toward that end, “we’re not techies, so the first thing we did, even before opening our doors, was to buy an Internet company so we would have that expertise on staff,” he notes. “Advertisers are now finding it more difficult to reach their markets, Starmark has capitalized on that trend because we’re able to deliver a more targeted message through public relations, the Internet, custom publishing and private TV networks.” Dan Estes admits that he is “going to have to retire from the advertising business at some point. By the time I turn over the reins, my goal is for Starmark to be a $100 million company. But it doesn’t mean that I’m going to retire from business. I’m definitely a hopeless entrepreneur and will be forever.”

The Inc. 500 ranks privately held companies according to sales growth over the past five years. To be eligible for this year’s Inc. 500, companies had to be independent and privately held through their fiscal year 2003, have had at least $200,000 in net sales in the base year of 1999 for Inc. 500 alumni and 2000 for new applicants, and $2 million in net sales for 2003. In addition, their 2003 sales had to exceed 2002 sales. Companies are ranked on averaged year-over-year sales growth. Inc. verifies all information using tax forms and audited financial statements from certified public accountants and by conducting interviews with company officials.

The companies that made this list have thrived despite continued stagnation in the economy, posting an average year-over-year sales growth of 265%. Inc. 500 companies posted aggregate 2003 revenue of $12.6 billion, and 82% of them were profitable. And while the United States shed 410,000 jobs in 2003, Inc. 500 companies provided employment for more than 70,000 people.

Further demonstrating the resilience of this year’s Inc. 500 crop is the fact that 102 of this year’s honorees started in 1999 – meaning that they weathered the start-up costs of the overcapitalized boom and thrived during the impending bust that was one of the toughest periods for young companies in recent memory.

“The best thing you can say about this year’s crop of Inc. 500 entrepreneurs is that they didn’t buy into the hype,” said Inc. editor-in-chief John Koten. “When people were practically giving away funding in the late 1990s, these companies didn’t overextend, and when everyone hit the panic button a few years later, they stayed calm and seized opportunity.”

The Inc. 500 Special Issue will appear on newsstands October 26.

Inc., the only business magazine dedicated exclusively to owners and managers of fast-growing private companies, delivers real solutions for today’s innovative company builders. It provides hands-on tools and market-tested strategies for managing people, finances, sales, marketing and technology. Inc. is the premier publication that focuses on small-to-medium size businesses, which are responsible for more than half the nation’s gross domestic product and 75% of its new jobs. And Inc. looks beyond work to address the entrepreneurial lifestyle. Inc., a Gruner + Jahr USA publication, inspires and informs, with cutting edge coverage that reflects our readers’ energy, brashness and imagination.

Starmark International specializes in the seamless integration of multiple marketing disciplines – branding, advertising, Internet development, direct response, custom publishing and public relations among them – toward the effective fulfillment of client business goals. Originally founded in Chicago in 1978, Starmark was the first company named to Inc. Magazine’s List of the 500 Fastest Growing Privately Held Companies for five years in a row. In 2003, Starmark was again named to the Inc. 500 ranking of the fastest growing private companies in America for the sixth time in the company’s 26-year history, and was honored as only the ninth agency headquartered in South Florida to be awarded accreditation to the American Association of Advertising Agencies (AAAA). Starmark is a member of the International Network of Advertising Agencies (IN), a global network of independent agencies that offer local experience and expertise, while providing access to international markets, intelligence and solutions.