Solve your biggest business problems with the Starmark Innovation Lab

Some business problems go way beyond traditional marketing. And that’s why Starmark created the Innovation Lab. Starting 40 years ago when we built the first B2B CRM database, we’re currently experimenting with AR and VR in the Metaverse, intelligent agents, blockchain and community building.

The goal of the Innovation Lab is to identify major business problems — places where a solution can fundamentally transform a business sector — and then research, prototype and experiment with that solution.

Starmark develops for a variety of platforms, in both VR and AR. We currently develop for the Oculus/Meta Quest 2, Magic Leap and Microsoft Hololens and AR native mobile apps. We also hold two U.S. patents. It’s innovations like these that propelled Starmark to the #1 Creative Agency, North America ranking on this year’s MMA Business Impact Index.

We Live in Virtual Reality

We dream in VR applications. From workouts to our biweekly sprint retro to brainstorms to gaming to client get-togethers to our own company meeting, every single Starmarker is into our second year of virtual reality being a part of daily life. We’ve got the headsets and the mindsets to be your Fort Lauderdale Meta Quest 2 development partner.

Way back in 2012, we launched one of the world’s earliest AR activations with SeaWorld’s new Antarctica attraction. Today, we’ve built convention centers, beachside portals and a working model of the Miami International Airport’s energy and water saving initiative — all in AR. Our development team is fluent in both ARKit and WebXR.

Getting cozy with Google, Alexa and Siri

In 2018, we got serious about machine learning and intelligent agents. Today, we’ve developed prototype voice skills for major voice assistant platforms and major brands. We just can’t talk about ‘em publicly, so get in touch for a guided walkthrough, demo or to discuss your project.

We hold two U.S. patents for means and methods of creating real-world rewards for digital social engagement, and we’ve also launched one of the country’s most popular and award-winning Philips Hue companion apps. Internet of Things explorations and app development are perennial endeavors for our Lab. 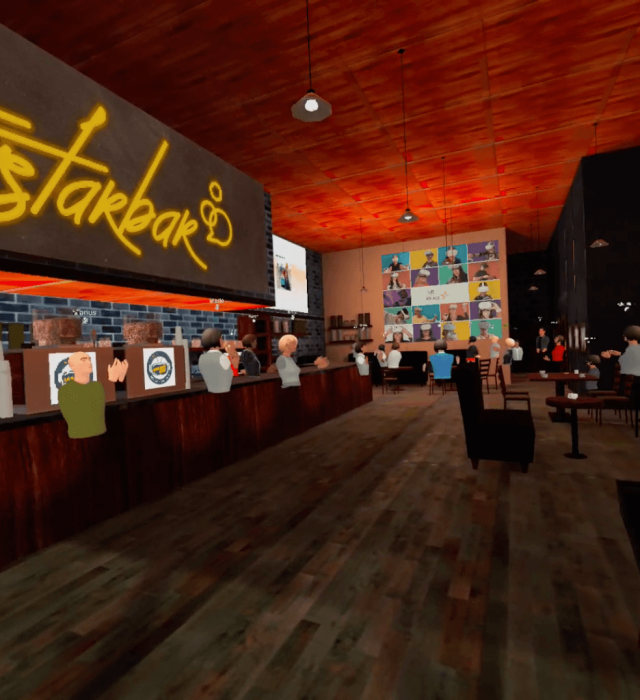 See the VR experience that netted us an MMA SMARTIES X Silver Award.

“Starmark helped us bring our audiences straight from Facebook to the beaches of Amelia Island in AR. We’re so proud of the innovations we’ve been able to accomplish together.”

We recreated MIA in AR to celebrate the completion of a 15-year greening initiative at one of the nation’s largest airports. Check out the app, and explore the project.

See how we welcomed visitors back to Amelia Island with Facebook AR ads that created portals straight to some of the destination’s hottest attractions.

For the introduction of Brightline in South Florida, we created a 360 tour to share a new type of luxury train travel with audiences.

What We’ve Learned after a Year in VR

It’s been more than a year that every Starmarker has been working and living in the Oculus Quest 2 headset. Here are the six big things we’ve learned along the way.

How to Prevent Nausea in VR

Nothing ruins a good time quicker than motion sickness. Here are the Starmark team’s six tested tips to have the most comfortable experience.

Create what's next with our Lab

We’re always researching, prototyping and experimenting with what’s next. So get in touch, and let’s build something great together.