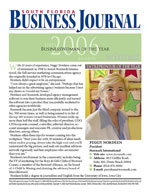 On Thursday, August 10, Starmark president Peggy Nordeen was named South Florida Business Journal’s 2006 Business Woman of the Year/Entrepreneur of the Year. The awards ceremony was held at the Hyatt Pier 66 Resort and Hotel in Fort Lauderdale. In the audience were 500+ members of the South Florida business community, who were there to honor business women of distinction, finalists and winners alike. Peggy was chosen for her prowess as a business woman and as a community leader in both the civic and philanthropic arenas.