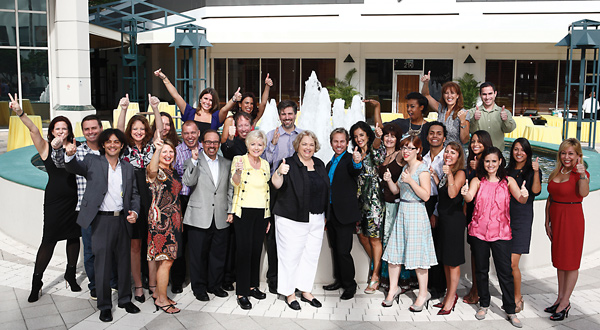 Starmark International, Inc., one of the largest advertising agencies in Florida, has made Museum Plaza in downtown Fort Lauderdale its national headquarters for the coming decade.

Nestled behind a beautiful fountain, in between the Museum of Art and 200 E. Andrews high rise office building, Starmark has remodeled a single-story former restaurant space with 15’ high ceilings into an intriguing creative office environment designed to reflect both the tropical lifestyle with technological advancements of our community in a new genre: “Tropical Modern.”

“We’ve carried on Dan’s vision for the space which is reminiscent of Chicago and New York loft-like creative office spaces but exudes the charm and lifestyle of our region,” said Circe. “We are using the look and feel of the region to differentiate our agency, continue to use our culture to recruit top talent and promote the community generally as a great place to work.”

For the last dozen years, Starmark has operated the “StarBar Networking Center” in its offices, hosting local business organizations and charities. There is a new Tropical Modern “StarBar Networking Center” in the Museum Plaza space, according to Hartnett. “The agency plans to host a StarBar networking event monthly after its Wednesday Webinars, which keep employees, clients and business associates updated on the latest eMarketing technologies,” she explained.

For the last several “under construction months,” Starmark posted window banners at the new location touting “Big Ideas are Coming Downtown” – a campaign Hartnett says will continue to prove itself true in the agency’s coming decade.