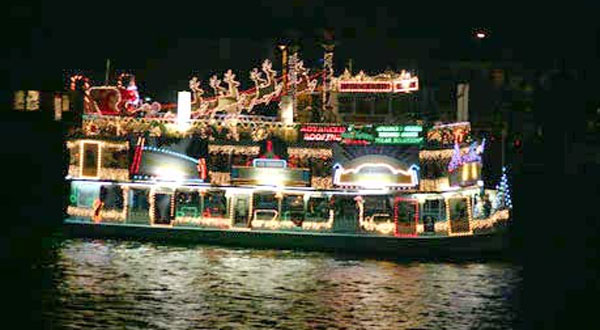 Fort Lauderdale’s annual Winterfest celebration is best known for one thing:  it’s one-of-a-kind boat parade. In its 38th year, the parade has been tagged the “Greatest Show on H2O” and “The World’s Most Watched Boat Parade” and – for good reason. Comprised of over 100 festively decorated boats, this illuminated armada leisurely makes its way up 12 miles of Fort Lauderdale intracoastal waterway, entertaining over one million spectators plus millions more via television. As always, it is a great way to celebrate the season with friends, family and associates. This year, Starmark treated its clients to their own version of boat parade “box seating,” complete with a panoramic view of the parade route, courtesy of agency president Jeff McClelland. Opening his home to colleagues and clients alike, he and Starmark Chairman Dan Estes treated guests to an evening of enlightening conversation, parade entertainment and gourmet eats. Such notable clients as AccuData, HMS National, The University of Miami School of Business Administration and the Greater Fort Lauderdale Convention & Visitors Bureau noshed on Chilled Seafood Platters, Marinated Chicken Wings, Grilled Tenderloin Sandwiches with horseradish sauce, Lobster Bites poached in Coconut Milk and more. Truly, the sky was the limit for guests, together with the team at Starmark, as they prepared to bring in a joyous holiday season and a new year of collective success.