When you think of Fort Lauderdale, chances are images of wild spring break parties come to mind. From the glory days of “Where the Boys Are” in the ’60s to the revelry of the mid-1980s, college kids flocked to the local beaches in search of sun and fun. Today, Greater Fort Lauderdale embraces this storied past as much as it celebrates the future.

“Spring break shaped who we are today,” explained Stacy Ritter, president and CEO of the Greater Fort Lauderdale Convention & Visitors Bureau (GFLCVB). “We wouldn’t be the diverse, cosmopolitan destination we are now without our popularity among younger generations.”

Having been the GFLCVB’s strategic marketing partner for the last 12 years, perhaps no one was able to capture that sentiment better than Starmark. And at the GFLCVB’s recent 2020 Growth Plan Luncheon — it showed.

Every year, approximately 500 hospitality professionals and Broward County elected officials attend the luncheon to share tourism insights and outlooks. But on February 12, 2020, GFLCVB and Starmark had something different in mind. “We wanted to celebrate the many milestones Greater Fort Lauderdale has seen over the last 40 years,” continued Ritter. “While at the same time build excitement for this new decade of innovation and change that is upon us. And we needed the entire community behind it. All 31 municipalities.”

Inspired by the evolution of the destination, the Starmark team gave the luncheon a theme: “Elevate. Celebrate.” 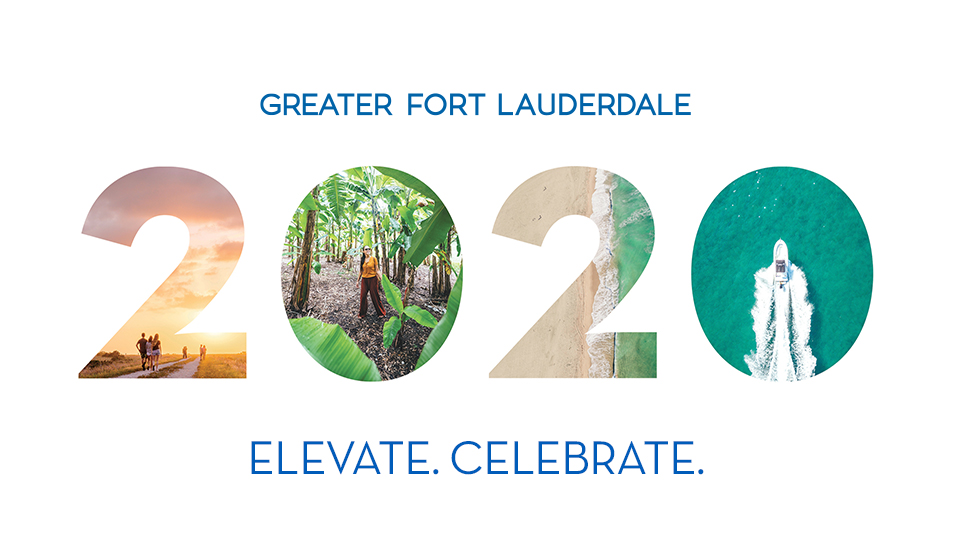 The team then created a plan to take the audience through “the story of Greater Fort Lauderdale,” with a compelling experience guests could enjoy from the moment they arrived until the very end.

After guests checked in, they traveled back in time as they strolled into the lobby where several 8-foot, backlit columns decorated the foyer. The museum-style columns represented Greater Fort Lauderdale’s history from the 1960s to the present day. The team researched hundreds of archives from the Fort Lauderdale Historical Society and the Broward County Library to find photos from the past. Guests could observe the photos on these columns, along with captions and dates explaining that point in time. 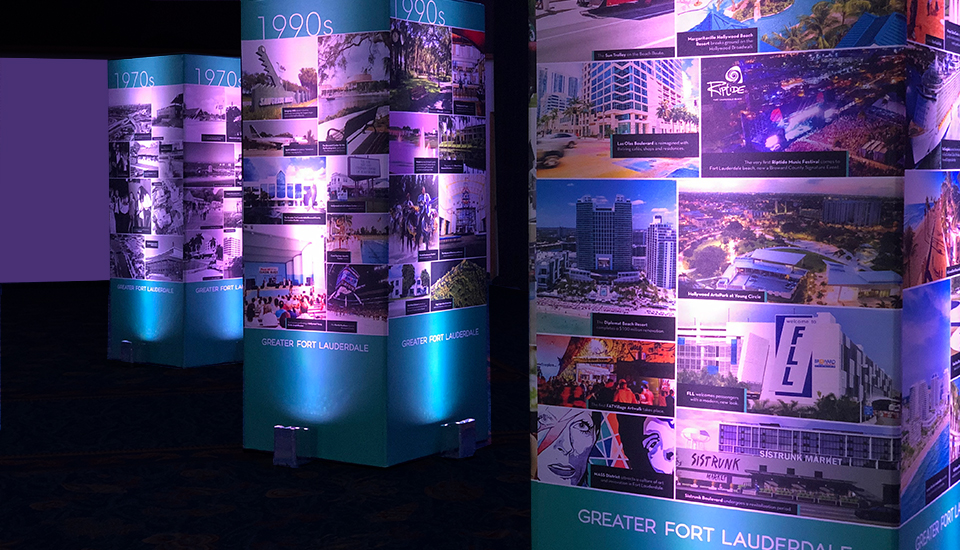 The photos from the columns then came to life through videos created in a 48-foot tunnel leading into the main ballroom: a luncheon feature that truly transported guests through the decades. The farther the guests walked, the more they could see the transformation from black and white spring break photos to colorful shots of today’s landscape.

At the end of the tunnel, guests entered the ballroom, where its walls were covered by a panoramic video of downtown Fort Lauderdale. Guests were transported to sweeping views of the skyline full of winding waterways, construction cranes, tall buildings and the Atlantic Ocean. In fact, it didn’t feel like you were in a ballroom at all.

“I have never been prouder to be part of our hospitality community as I was [the day of the luncheon]…Deepest acknowledgment to the creative teams and staff that made this day a crowning moment for our destination,” said Ina Lee, TravelHost Fort Lauderdale Magazine founder and trailblazer for the tourist industry as a 20-year member of the Marketing and Advertising Committee of the Convention & Visitors Bureau. (Lee currently serves as its vice chair.)

Once the guests were seated, their attention was captured by an animated postcard flying around the video screens on all four walls to land at the front of the ballroom. Dramatic and effective, the kabuki screen fell to the floor, revealing the stage as our main video began to play. 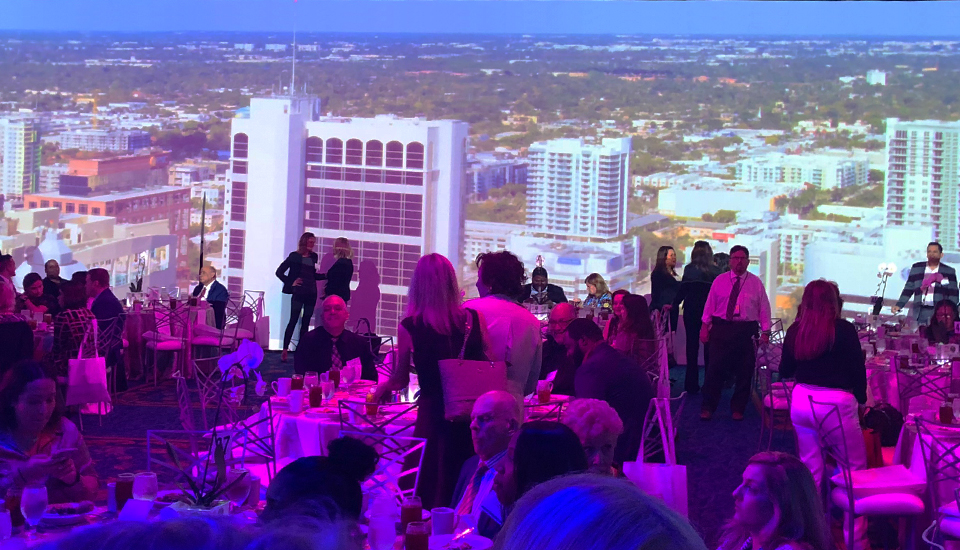 Guests Meet the New Greater Fort Lauderdale with a Video

Taking center stage, the “Story of Greater Fort Lauderdale” video utilizes photos from the past and hyperlapse footage from the present to reveal how the destination has evolved over time.

The Show Goes On

Starmark created an accompanying keynote presentation that stretched across three separate video screens on the stage, as the 2020 Growth Plan was revealed.

Throughout the presentation, the panoramic screens surrounding the ballroom changed during each segment. Massive cinemagraphs transported the audience to an underwater wonderland with sea turtles swimming around, the Florida Everglades with alligators lurking, and the local waterways with boats gliding by. 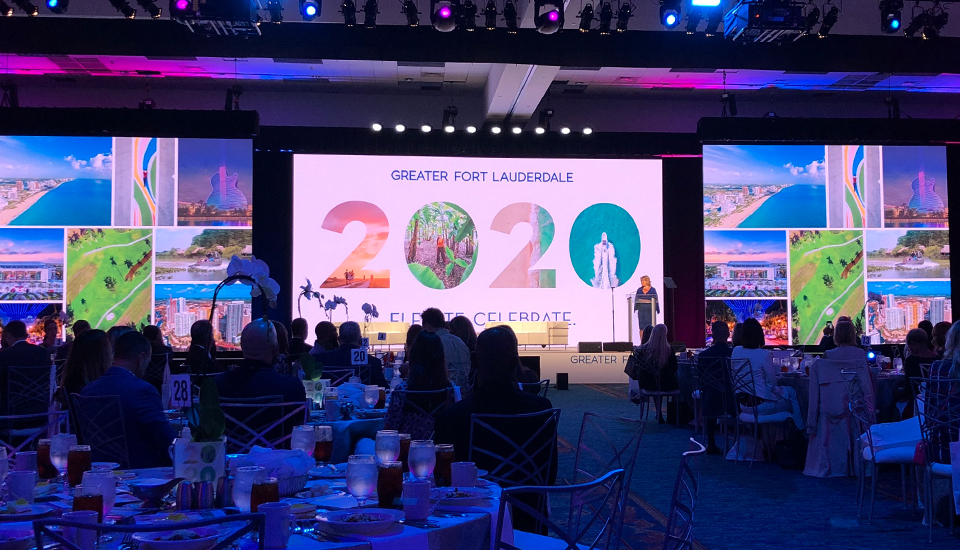 The team also wrote and produced a video showcasing the staff at GFLCVB. Airing at the luncheon, the video captured the GFLCVB team’s passion for their destination, posing the question, “What do you love about Greater Fort Lauderdale?” Using a little bit of humor and a whole lot of heart, the video culminates in a rallying cry for the entire audience to join their mission of building community in the name of tourism.

To foster community relationships between residents, officials, and the local tourism industry, guests were treated to a tin filled with custom-designed/written postcards: one for each municipality in Greater Fort Lauderdale, as well as the FLL Airport and Port Everglades. Each postcard was also featured in a photo-op wall in the lobby for guests to pose in front of at the end of the luncheon. 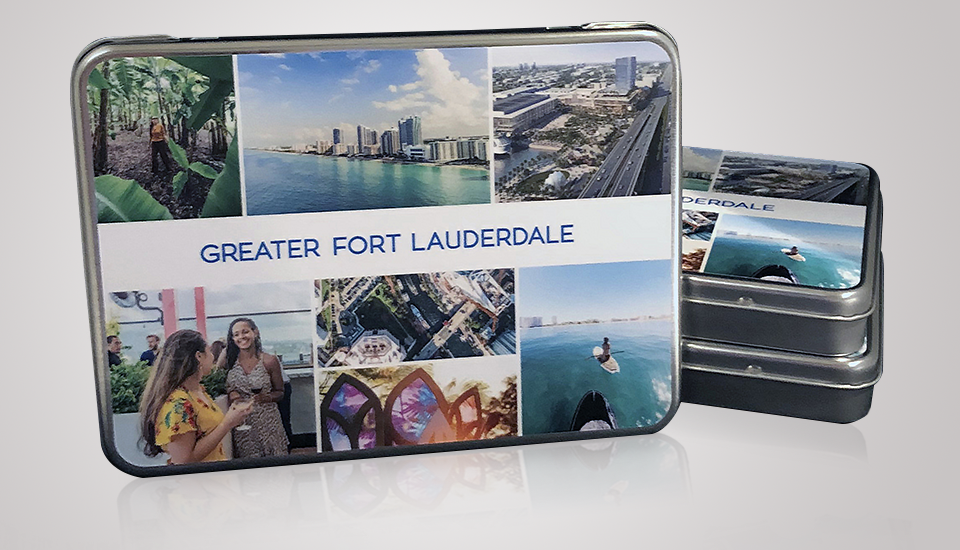 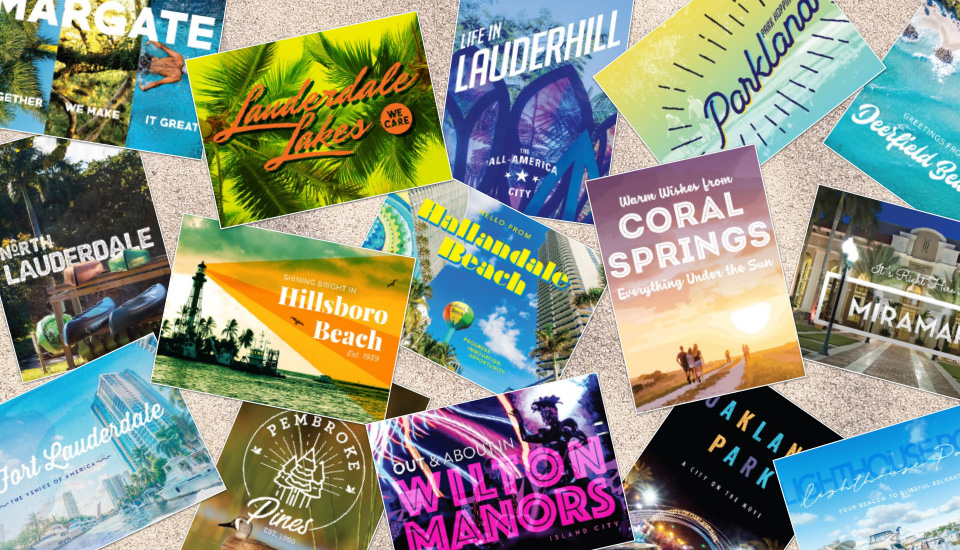 The 2020 Growth Plan addressed the state of tourism, market research (with the help of Destinations International), GFLCVB’s marketing direction, goals, and paid media buys. The 90-page booklet, overall, summarized the destination’s emphasis on the importance of community in tourism. Attendees received their plan in a Visit Lauderdale tote bag. 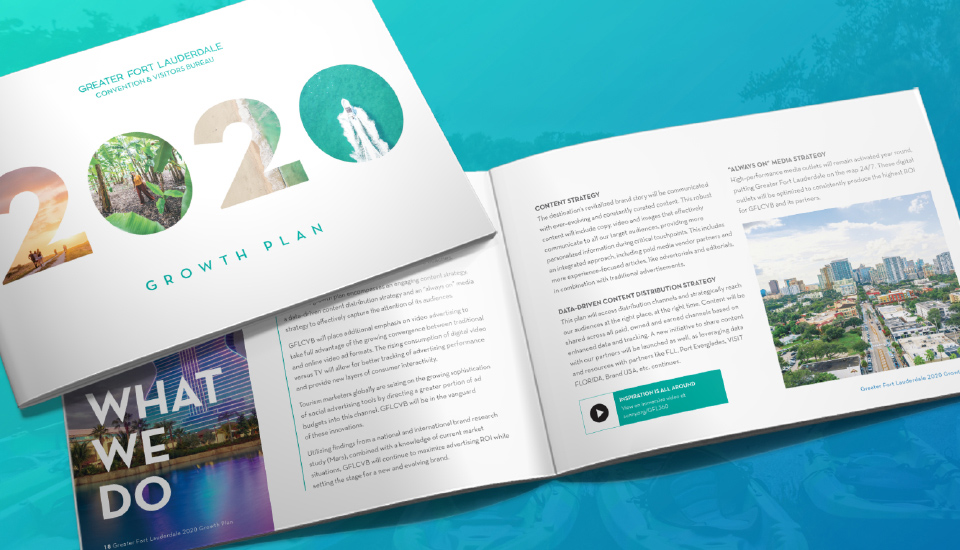 Strategically placed throughout the collateral were QR codes that linked to AR and 360-degree experiences Starmark created as selling tools for Visit Lauderdale. Experiences included an AR Facebook portal to the exterior of the new convention center expansion (a first-of-its-kind destination planning tool on social media), a 360-degree video from the top of a skyscraper in downtown Fort Lauderdale, and an AR Facebook table-top model of the new convention center expansion. 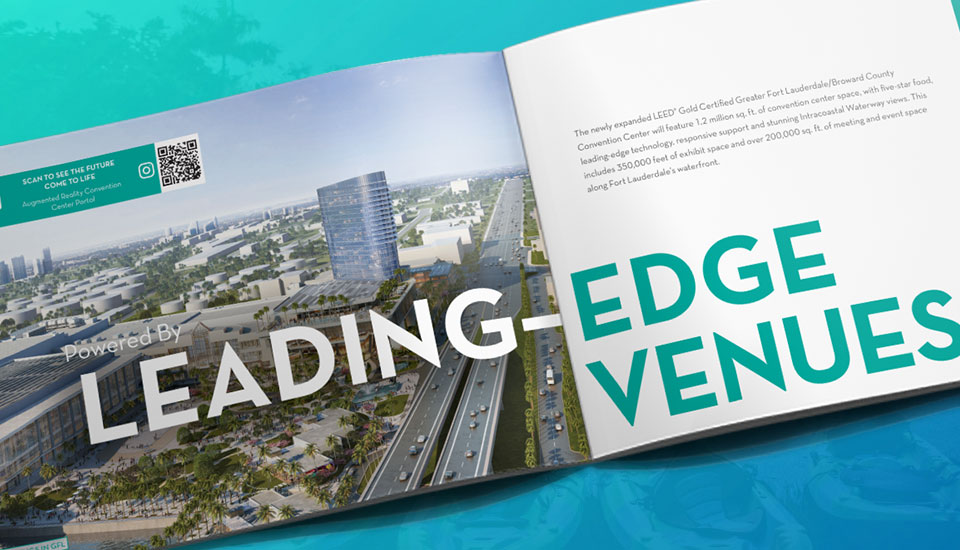 At the conclusion of the presentation, Ritter invited guests to pick up confetti cannons and toast to the new decade. Confetti rained down on the ballroom as the music from the “Story of Greater Fort Lauderdale” video flooded the speakers: a true celebration of how far we’ve come — together, as a community. Guests left the convention center that day in awe of the luncheon’s production level and feeling optimistic and empowered for the destination’s next chapter. 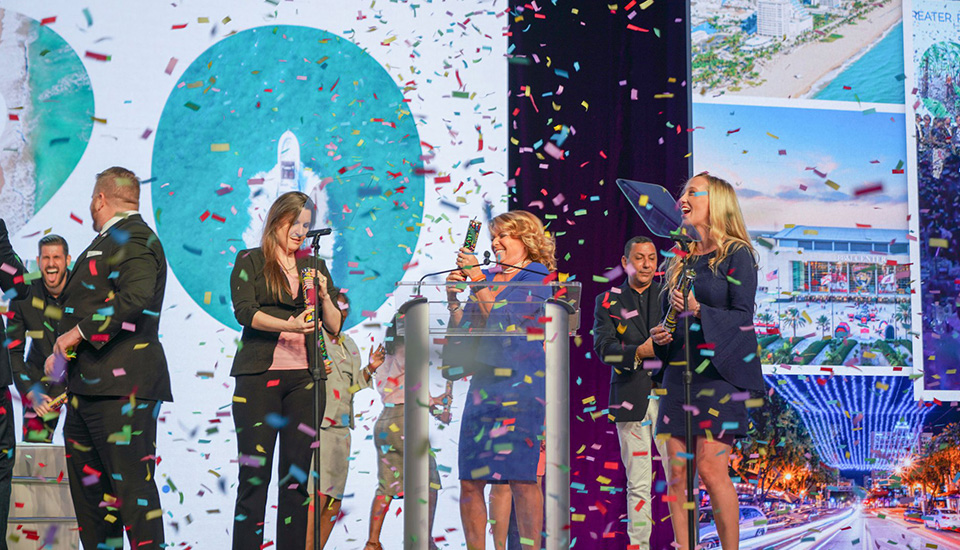