And the Flagler Award goes to… 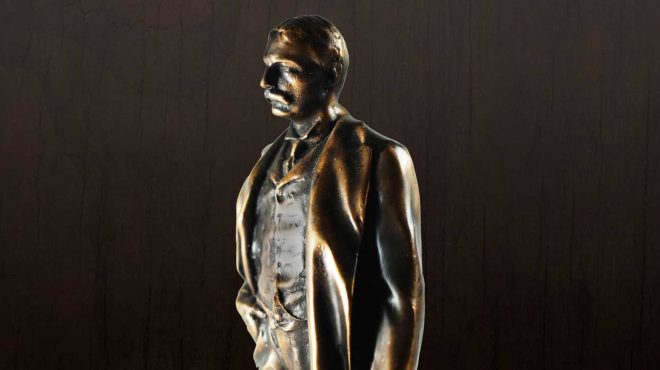 Once again, Starmark and our clients took home several Flagler Awards this year at the 2014 Visit Florida Governor’s Conference, which was held September 22 at the Boca Raton Resort. The team scored top honors with five coveted “Henry” Awards, plus three Bronze Awards for the Greater Fort Lauderdale Convention & Visitors Bureau (GFLCVB) and SeaWorld Orlando. Starmark, in partnership with GFLCVB and M. Silver, a division of Finn Partners, was awarded a Henry in the creativity and public relations category for the “The Beach Looks Good on You” Brand Bridging Event. Over the last three years, Starmark has successfully executed these guerrilla-style events under the Hello Sunny brand umbrella in different cities across the globe for GFLCVB, with off-the-chart results.

“It’s very exciting to see the Hello Sunny brand continue to evolve in new markets across multiple marketing platforms, stated Dale Baron, Starmark vice president and executive creative director. “We are especially pleased to have gained the recognition among other Florida destinations and to have received top honors from the Governor.” The GFLCVB “Fort Lauderdale Vacation Planner” also took home a Henry in the resource/promotional material consumer category. This marks the second year in a row the team has won first place in this category. Starmark and GFLCVB also won the Henry in the resource/promotional material trade category for the Meet Sunny Direct Mail Campaign. “The campaign was a creative three-part mailer, and it achieved outstanding ROI,” explained Lisa Hoffman, Starmark vice president of client services. “We scheduled 18 FAM trips from planners around the country, and booked one convention as a direct result of the program so far.” The 2013 GFLCVB Marketing Presentation Luncheon also won a Henry in the tourism advocacy category. “Our tourism numbers have been increasing year after year,” said Hoffman. “The Marketing Luncheon was a great way to celebrate with everyone who works in the industry. It was fitting to be awarded a Henry in that category, because it’s really a win for everyone in the industry,” she added. Additionally, Starmark and GFLCVB won Bronze Awards for the Sunny.org Mobile Website and for the Fort Lauderdale Urban Experience Campaign. With a nod to Starmark’s thought leadership in mobile marketing, this is also the second year in a row the team won a Henry in the best mobile app category. This time with our SeaWorld Orlando client, for the “Antarctica Epic Voyage App.” “We’re really proud of the Epic Voyage app,” said Brett Circe, Starmark’s chief interactive officer. “It was the first time we implemented augmented reality technology into a mobile app. It gives users to the unique ability to create videos of themselves interacting with penguins.” The app was part of an integrated marketing campaign Starmark created to help SeaWorld Orlando launch its newest attraction, Antarctica: Empire of the Penguin. Congratulations to our client partners and to our teams that worked so tirelessly to bring these award-winning, Big Ideas to life. About the Henry The “Henry” awards salute Henry Flagler, the late 19th- and early 20th-century railroad and hotel magnate whom many people consider the grandfather of Florida’s tourism industry. Presented by VISIT FLORIDA®, the state’s tourism marketing corporation, the Flagler Awards program is designed to recognize the outstanding tourism marketing efforts of Florida’s travel businesses, destinations and attractions. About the Flagler Awards The Flagler Awards were established by the Florida Commission on Tourism to recognize outstanding tourism marketing in Florida. Each year, the Flagler Awards honor many of the countless individuals and organizations that help position Florida as the #1 travel destination in the world. The Awards pay tribute to the determined efforts of those who use their skill, resourcefulness, creativity and innovative spirit to market Florida to the world, and, in doing so, help ensure the continued success of the state’s most important industry