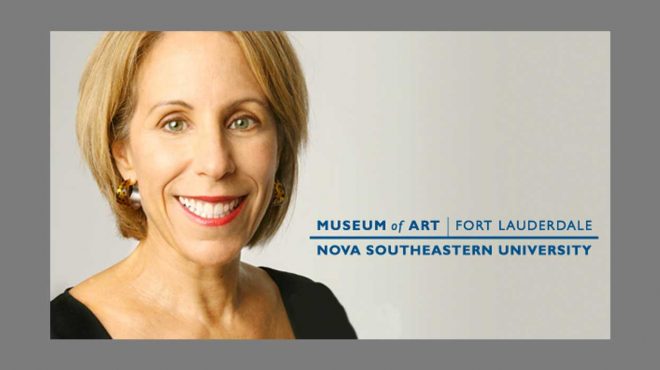 Nova Southeastern University’s (NSU) President and CEO, George L. Hanbury II, Ph.D., today announced the appointment of Bonnie Clearwater, M.A., as the new Director of NSU’s Museum of Art | Fort Lauderdale effective September 3, 2013. Clearwater joins NSU’s Museum of Art | Fort Lauderdale from the Museum of Contemporary Art (MOCA) in North Miami. Clearwater will work closely with the museum and university staff, and the museum’s Board of Governors, to lead the museum into an era of unprecedented transformation and growth.

Recognized for her visionary leadership, scholarship and commitment to artists and education, Clearwater brings to the museum her extensive knowledge and experience in shaping an institution’s identity and mission, and in developing thought-provoking exhibitions and collections. She shares the university’s goal of expanding the museum’s educational initiatives, partnerships and cross-disciplinary collaborations to fully integrate the museum into both NSU’s academic and extra-curricular campus life and into the broader art world.

“Bonnie has an exceptional track record as a museum director, curator and scholar, and strikes the perfect balance as a creative visionary and administrator with the ability to engage and inspire people of all backgrounds,” said Hanbury. “Capitalizing on NSU’s academic resources, she will develop new opportunities for synergy between the museum and the university, forging exciting connections between art and education. We look forward to her leadership at NSU’s Museum of Art | Fort Lauderdale.”

One of the most prominent figures in South Florida’s art world, Clearwater is the Director and Chief Curator of the Museum of Contemporary Art (MOCA), North Miami. During her 18-year tenure, she transformed MOCA into a museum of international stature, recognized for its original and groundbreaking exhibitions, collection, education and public programs. Clearwater has championed both emerging and established artists, who have become among the leading artists of our time, and played a key role in establishing Miami as a preeminent international arts center and destination.

“Bonnie is an internationally known leader in the arts with tremendous energy, creativity and an unparalleled understanding of the field,” said David Horvitz, chairman of the Board of Governors of NSU’s Museum of Art l Fort Lauderdale. “Becoming the Director of NSU’s Museum of Art provides a transformational opportunity for our museum, for the university, for our community and for Bonnie.”

“The integration of lifelong learning and a love of the arts has been central in my professional career and personal life, and is at the heart of NSU’s Museum of Art’s mission,” said Clearwater.

She was present at the opening of the museum’s building in 1986 when its galleries and lofty spaces became a beacon of art and culture for all of South Florida. “It’s a gem of a museum that deserves worldwide attention,” she said. “I am looking forward to working with the museum’s deeply committed Board of Governors and staff, along with NSU’s leadership and faculty. Together, we will build upon the strong programs already in place to raise the museum’s standing regionally and nationally as a dynamic center of culture, education and community engagement.”

Located in downtown Fort Lauderdale, Nova Southeastern University’s Museum of Art | Fort Lauderdale was founded in 1958. In 2008, it became part of Nova Southeastern University, one of only 37 universities nationwide to be awarded with both the Community Engagement and “high research activity” classifications by the Carnegie Foundation for the Advancement of Teaching. The merger with the museum expanded the college’s creative campus, and helped support NSU’s degree programs in fine arts and arts administration.

The museum’s distinctive modernist building opened in 1986 and was designed by architect Edward Larrabee Barnes, whose other museum designs include The Walker Art Center and Dallas Museum of Art. The 83,000 square-foot museum contains 25,000 square-feet of exhibition space, the 250-seat Horvitz Auditorium as well as a branch of the Books + Books bookstore and café.

The museum’s 6,000-work permanent collection is recognized for its extensive holding of works by the American painter William Glackens, paintings by the CoBrA group of expressionists, and a highly prized collection of works by Latin American artists. In addition to the collections the museum maintains a special focus on photography. The museum presents an active education program through its dynamic AutoNation Academy for Art + Design, which is located in an adjacent 11,000 square-foot building, and provides year-round studio instruction and classes for adults, children and teens taught by locally and nationally known professional artists.