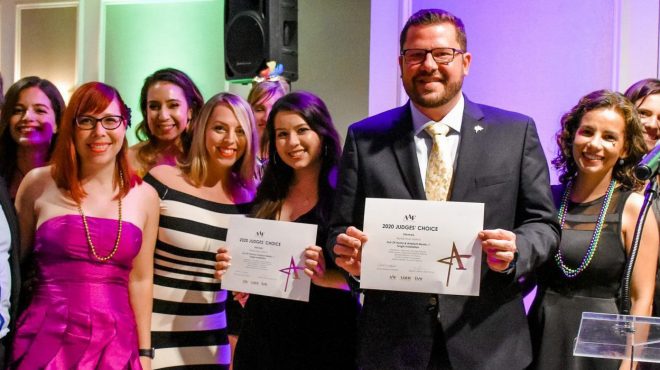 Starmark was a big winner during this year’s American Advertising Awards (ADDY) Gala for Fort Lauderdale and Palm Beach County.

Two Starmark entries were selected for special recognition by the judges for this year’s competition. The Judge’s Choice Awards go to work that a judge felt was particularly noteworthy and impactful.

The team took home two Gold ADDY Awards — one for NSU Florida (Nova Southeastern University) and one for the Greater Fort Lauderdale Convention and Visitors Bureau.

The Riptide activation selected for a Judge’s Choice Award also won ADDY Gold in the Ambient Media/Single Installation category. It now advances to judging at the district level of the competition.

As part of the recent NSU Florida rebrand, Starmark created a video, The NSU Edge, to bring the new brand position to life for prospective students and the community. This entry won ADDY Gold in the Cinematography category.

We’re so proud of and excited about the great work we produced together this year. The big wins really add to our gratitude and pride.
— Kyle Fisher, Vice President, Nova Southeastern University Public Relations and Marketing Communications

Starmark’s work for the Joe DiMaggio Children’s Hospital won ADDY Silver in the Public Service/Campaign category. The Catch the Love Campaign is designed to showcase the impact of the hospital and attract new supporters.

Starmark helped overhaul and modernize the NSU mascot, Razor, in 2019. The mascot won ADDY Silver Awards for both Art Direction and Guerrilla Marketing.

Starmark created a social campaign and video series highlighting the origin story of the character and building intrigue ahead of the Homecoming pep rally reveal event for NSU Florida’s updated Razor mascot. This entry won ADDY Silver in the Social Media Campaign category.

Starmark created a teaser campaign to promote Pride of the Americas, the inaugural Pride festival for North, Central and South America, to be hosted in Fort Lauderdale in Spring 2020. The teaser campaign took ADDY Silver in the Card, Invitation, Announcement Campaign Category.

We’re so proud that our work is making an impact in tourism, higher education and healthcare. It’s an honor to be recognized among the best in the area.
— Dale Baron, Starmark Executive Creative Director

About the American Advertising Awards